That time when everyone thought the world was going to end. 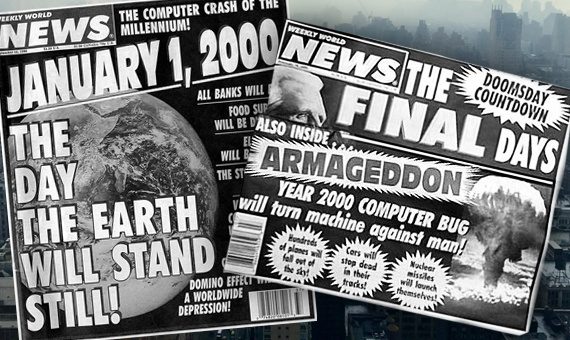 It was the 1990’s, and we were heading toward a disaster of biblical proportions, or so they claimed. For decades a known bug lurked deep in the heart of all the computers that ran everything. A time-bomb, no, nuclear explosion just waiting to go off. It was set to explode on 12:00:01 on January 1st, 2000. A new year, a new decade, and new century and a new millennium. The second coming surely has be be nigh.

Nope! Nothing so dramatic. It was just the so-called Y2K bug. It was caused by many decades of using a two digit year in dates. Like 07/18/72 instead of 1972-07-18. So, the fear was that at midnight on January 1st 2000, the years would roll over to 1900. Or at least computers thinking it was 1900. This was suppose to cause all sorts of mayhem. Everything from computers crashing and not restarting to massive data corruption. All our digital records were at stake.

Well, obviously, I don’t believe in anything biblical. And as such, nothing happened. The world didn’t end. Life went on. I suspect the real reason for that fact was all the work that was done in the last decade of the 20th century to fix it.

Yet the problem ran deep. Tracing it’s roots to the earliest computers, to save memory when computers had KB instead of GB like today. Even some hardware clocks on some mainframes had the problem. Some people, who really didn’t understand computers, thought someone could just right a magic computer program to fix it all. But, nope, computers don’t work like that. It took many years of reviewing and fixing code, and writing patches in software for hardware that couldn’t be fixed.

I was well along in my career by 1/1/00, so I had plenty to deal with. When I was at the printer company, I had written a CGI script for accounting that had to keep track of dates. It was written to be Y2K Complaint from the beginning. Oddly it did have a bug that caused to to miss-calculate Leap years and was broke from Jan 01 to Feb 29 on leap years. The later I was working at the ticketing company until 12/99, so I had to make sure all their hardware and OS’s were Y2K Complaint from the vendors. By the time I started at the Bank, everything was already certified. I just had to be on-call in case something happened. Nothing did. It was a quiet new years eve.

While the world didn’t end on that faithful night 20 years ago, one funny thing did happen. On the night of Jan 1st, 2000, when the world didn’t end, I went to see Metallica. The opener, Kid Rock, who sucked ass, BTW, had his PA blow up 30 sec into his set. They switched to a back up and the show went on. But some wise guy in the audience did yell out “Welcome to the Year 2000!” right after it went silent.